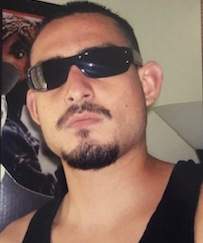 It’s with great sadness we announce the passing of Ami Gonzales after a prolonged illness. Ami passed away on October 2nd, 2021, at the age of 35, while visiting cousins in Las Vegas. He was born on July 25th, 1986, in Simi Valley and grew up in Fillmore. He was the beloved son of Ernie and Techi (Esther) Gonzales of Fillmore. He was proceeded in death by his father Ernie Jr., grandfather Ernie Gonzales Sr. and David Lopez, uncles Carlos Lopez, Dennis and Matt Gonzales. He is survived by his mom, sister Eula, brother-in-law Chris, nephew Griffin Hunter from Utah and brother Josiah Gonzales; Grandmothers Noemi Loza of Santa Paula and Bella Gonzales of Fillmore, many loving Aunts, Uncles and Cousins. Ami graduated in 2004 from Moorpark High. After high school he traveled to many places, he accomplished his dream of traveling before his was 25-years old. At 18 he moved to Hawaii with his sister and from there he went to Puerto Rico, Tennessee, Virginia, Oklahoma and Utah, making new friends which he still kept in touched with till his last days. Ami will be remembered for the unconditional love he had for animals. He always had his dog Chapo with him, who is missing him dearly. He will be remembered for his big and beautiful heart--he would give the shirt off his back to help those in need, a place to stay, eat or just to take a shower. He will be remembered for his love of knives and home-made weapons that he use to practice with; he was never seen without a knife on his belt. He was a survival freak and was ready for the Big One (earthquake). Ami was a joker and loved playing tricks on people, loved the outdoors, hiking, camping and fishing, taking pictures of the sunset and moon, cooking, history, kids and Frank Sinatra. Ami was a donor and his kidneys were successfully recover and transported to save two lives. He was always a giving person till the end. Amadeus’ celebration of life will be held on November 12th at 11:00am at Perez Funeral home, reception to follow at the Veterans Memorial Building in Fillmore.
To order memorial trees or send flowers to the family in memory of Amadeus Gonzales, please visit our flower store.