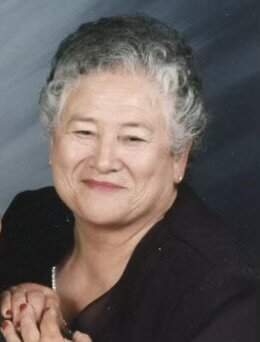 At 91 years old, Dolores Castro, beloved wife of the late Ruben Castro, passed away after a brief illness. She is the much-loved mother of Steven Joseph Castro, deceased (Pamela), Theresa Ann Castro, Patricia Ann Aguirre (Armando), Maria Irene Arambula (Salvador), William Castro (Rachel), and Liza Vasquez-Castro (Henry). Cherished Grandmother of Antonio Castro (Lisandra), Alejandro Castro (Vi), Ana Castro-Santti (Pierre), Sonia Arce, Guillermo Arambula, Andres Arambula (Alison), Dominique Arambula, Yvette Villanueva, Ruben Castro (Trina), Steven Castro (Leticia), Michelle Castro, Veronica Tackett (Michael), and Trinity Ann Vasquez-Castro. Great grandmother of Dominic, Nicholas, Dannica, Mia, Eli, Ari, James, Joseph, Christopher, Nicholas, William, Jayden, Ava, Anthony, and Zachary. She was born on April 16, 1930, in La Verne, California to Miguel and Micaela Arenas. Her family emigrated to California in 1919 from Mexico. The Arenas family lived in Palmdale and other places in Los Angeles County before settling in Moorpark in 1934. She attended Moorpark schools and graduated Moorpark Memorial Union High School in 1948. She married her high school sweetheart, Ruben Castro, in December 1950. They lived in Colorado where Ruben was stationed in the United States Air Force. They returned to Moorpark to help with the family business, La Mas Barata grocery store. (Later known as Castro’s Market.) Dolores was a devoted daughter who regularly visited her aging parents often bringing her children along to spend time with their grandparents. She cared for her parents their entire lives. She accomplished this even while being supportive of her husband, raising her children and working fulltime. She was also a faithful and helpful wife to her husband, Ruben, of 58 years. She managed the household which allowed him to better serve the community of Ventura County, Holy Cross Church and Catholic Charities. She was a parishioner of Holy Cross Church and attended services most of her life until appearance to church became difficult. She faithfully prayed the rosary and watched the mass on TV daily. Our mother was preceded in death by her parents Miguel and Micaela Arenas, siblings Maria Teresa “Dorothy” Ramirez, Mercedes (Mercy) Sandoval, Jesus, Manuel, Josephine, Ignacio, Guadalupe (Lupe) Sanchez, Rosario Luevano, Guillermo, and Irene Carranza. While we know that our mother is in a better place, our hearts are heavy with our loss. We loved Mom deeply and she is greatly missed. A very special thanks and appreciation to Rolando and Vladimir of Emerald Home Health, Inc. for the loving care given to our mother over the past few years. On Sunday, March 13th, visitation will be from 12 to 5 p.m. at the Perez Family Funeral Home, 1347 Del Norte, Camarillo, with the rosary service to begin at 3pm. On Monday, March 14th, the funeral service will be held at 10 am at Holy Cross Church, 13955 Peach Hill Road, Moorpark, with the burial to follow at Santa Clara Cemetery, 2370 N. H Street, Oxnard.
To order memorial trees or send flowers to the family in memory of Dolores Castro, please visit our flower store.

The Rosary will begin at 3pm