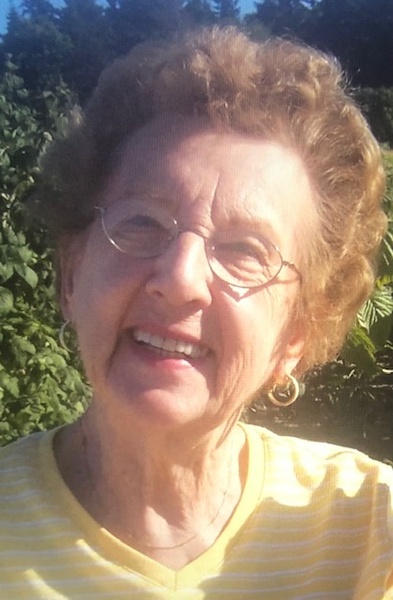 Hand delivered by a local florist

Dolores Peters passed away surrounded by loved ones on September 13, 2022 in Thousand Oaks, California, after a short illness. She was 95.

Born in Hamtramck, Michigan, Dolores grew up in Detroit during the Great Depression with her older sister Virginia and her Polish-born parents Joe and Mary Piotrowski, who owned a neighborhood grocery store.

Dolores loved music and singing. Blessed with a lovely voice, as a young girl she sang in her uncle's nightclubs, drawing the attention of a talent scout, but had to decline the offer due to her parents' concerns about show business. As fate would have it, several of her children later became performers.

After graduating from St. Mary Commercial High School in 1945, Dolores became a medical secretary at the Marine Hospital at Windmill Pointe in Detroit. Thus began a lifelong dedication to helping others and working in hospitals. At one point she contemplated becoming a nurse.

In 1953 she married Ralph Peters with whom she had six children. Ralph's career with Ford took the family overseas to live in Essex, England, and Melbourne, Australia. Dolores embraced these new adventures with enthusiasm and was forever grateful for these opportunities to enrich her children's lives through travel.

In the early 1980s, the family settled in San Diego, Calif., a town where Ralph had been stationed after WWII and remembered fondly. They spent many happy years there. It remained Dolores' favorite place to live.

A magnanimous and empathetic person her entire life, Dolores found time to volunteer everywhere she lived. She volunteered for 28 years at Scripps Memorial Hospital in La Jolla, Calif., and at Fairfield Infectious Diseases Hospital in Melbourne, Australia, and Bon Secours Hospital in Michigan.

In addition to music, reading and libraries were Dolores' great passions. She was well-read, a gifted singer, pianist, accomplished cook and a wonderful role model. Her parenting skills were second to none. Ever cheerful, it only took a stern look and the searing words "I'm disappointed in you!" to bring a wayward child into line.

Above all, Dolores was known for her warmth, generosity and sense of humor. Adventurous, open-hearted and open-minded, she was fascinated by people and had a deep sense of justice. She was a wonderful mother and wife, a caring daughter and a great friend.

Dolores will be enormously missed by her extended family and the many people whose lives she touched and graced throughout her long, rich and meaningful life.

She is survived by her six children: Mark, Christopher, Laurie, Susan, Rick and Daniel, 12 grandchildren, and two great-grandsons. A private service will be held on Sept. 24 at St. Maximilian Kolbe Church in Westlake Village, Calif. In lieu of flowers, the family asks that donations be made to Dolores' favorite charity: St. Jude Children's Research Hospital (https://www.stjude.org/ (see below).

To order memorial trees or send flowers to the family in memory of Dolores Peters, please visit our flower store.