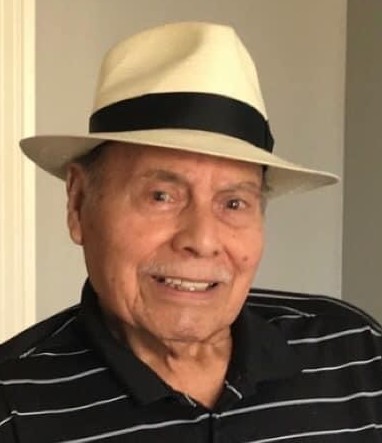 Guillermo “Willie” Almaraz February 11, 1924 – October 9, 2020 On October 9, 2020, Guillermo “Willie” Almaraz, entered into eternal peace with family by his side. After a short battle with lymphoma and other health related issues, our heavenly father saw his pain and chose to take him home. Willie, as he was known by many, was born on February 11, 1924, in Mercedes, Texas to Rosendo and Trinidad Almaraz. Willie served in the U.S. Navy from 1943 to 1946 while stationed in San Diego, California. Willie and his beloved Beva came to California in the late 40’s, returned to Texas and in 1966, they returned to California and settled in Oxnard. Willie worked for Bob Jones Strawberry Ranch for close to 30 years alongside his wife until they retired in 1993. Willie and Beva were married at a very young age and their marriage lasted for 77 years until he lost his precious Beva in 2017. Their love and devotion to each other was an inspiration to us all. Willie loved to watch his favorite golfer, Tiger Woods and enjoyed watching old Boxing matches and old western movies. He was a devoted husband, father, grandfather, great-grandfather and great-great-grandfather. He will be dearly missed. Willie is preceded in death by his beloved wife, Genoveva “Beva” Almaraz, his parents, Trinidad and Rosendo Almaraz and his siblings, Dolores “Lola” Gonzalez, Cleotilde “Cota” Castro, Alberto, Carlos, Manuel, Alejandro and Mario Almaraz. He is survived by his five children, Emma (Ramon) Navarro, Adela Cavazos, Bill (Chris) Almaraz, Danny (Annie) Almaraz and Tammy (Robert) Tripp; as well as 21 grandchildren, Ray, Patricia, Leo, Steve, David, Anne Marie, Matt, Monica, Teresa, Barbara, Melissa, Audrey, Adelita, Dago, Channell, Candace, Chaylene, Charmaine, K.D., Tawnia & C.J.; 28 great-grandchildren, Ashley, Bianca, Marissa, Zachary, Sidney, Justin, Cameron, Brett, Trevor, Braelyn, Michael, Simon, Isabella, Iliana, Anthony, Patrick, Liam, Piper, Thomas, Nicholas, Emma, Samantha, Sabrina, William, Ava, Maddie, Moises and Harley and two great-great granddaughters, Wren and Avery; as well as his sister, Anita (Joe) Gutierrez, brothers Art (Eloisa) Almaraz and Joe “Pepe” (Celina) Garza. The family would like to thank the staff at Dignity Health Hospital (St. John’s Hospital) for the care provided to Willie during his stay. But most of all, we'd like to thank his neighbors, Ray and Debbie Ulmer and Janet Carlson, daughter Janet and Mike for always keeping an eye out for Dad and being the best neighbors. We are so appreciative of your friendship and support. The family would also like to thank his caretaker, Irais Resendiz for staying by his side and caring for him for the last three years. A Catholic Vigil is planned for Tuesday, October 20, 2020, with visitation from 4:00 p.m. to 9:00 p.m., and recitation of the Rosary at 6:30 p.m. at Perez Family Funeral Home, 1347 Del Norte Road, Camarillo, CA. Mass of Christian Burial is set for Wednesday, October 21, 2020 at 10:00 a.m. at Santa Clara Catholic Church, 323 S. "E" St., Oxnard, CA. Graveside services to follow at Santa Clara Cemetery, 2370 N. "H" St., Oxnard, CA.
To order memorial trees or send flowers to the family in memory of Guillermo Almaraz, please visit our flower store.