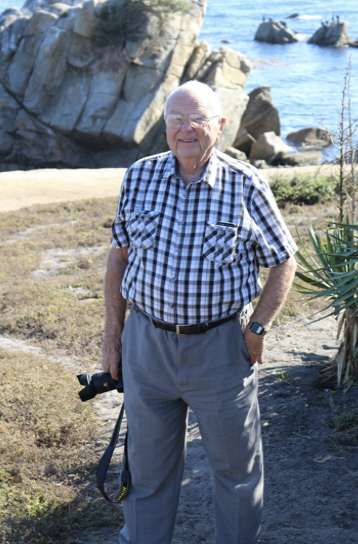 Oxnard, California James Kenneth Redwine, 95, went peacefully to be with our Lord and Savior on Saturday, October 17, 2020. He was born on February 22, 1925 in Ukiah CA to James Augustus and Edna P. Redwine of Covelo CA. He is proceeded in death by his wife and love of his life, Bobby Sue whom he married on February 17, 1962 in Las Vegas NV after being captivated by her beauty and southern charm. James (better known as Jim to friends and Jimmy to family) grew up in the small community of Covelo CA on his parent’s walnut orchard. He was active in music in school and at church. After graduating with honors from Covelo High School, he attended Bethany Bible College in Scotts Valley. Afterwards he received an appointment to the Maritime Academy in San Francisco. Upon completion of his maritime training, he traveled the world as a Merchant Marine, which included time in the US Coastguard while ferrying troops to conflicts in Asia. During his maritime career, he was also a building contractor and built homes in Monterey CA for several years. He also owned a remodeling business and cabinet shop in Santa Monica for several years. Later in his career he settled in Puyallup WA while working as a ship’s captain on the TOTE shipping line (SS Great Land and SS Westward Venture) providing service between Tacoma WA and Anchorage AK. His job with TOTE provided a duty rotation of 4 months on the ship and 4 months off. He and his wife decided to look southward for warmer climes and ended up purchasing a home in Oxnard CA to use during each 4-month shore rotation. Jim retired in 1975 and made Oxnard his permanent home. Some years later, a local marine company contacted Jim and employed him for many years as the captain on the Port Hueneme based Self Defense Test Ships (USS Decatur & USS Paul F. Foster). James also had a love for photography, Hawaiian music, and playing the ukulele. He often entertained his family and friends with Hawaiian songs which he sang while accompanying himself on his ukulele. James also loved sharing the love of Christ with anyone he met along with supporting ministries whose goal was to spread the gospel of Jesus Christ. James is survived by his son, James Mark Redwine (Isabel) of Oxnard, his grandsons, James Michael Redwine (Jaime, Mikahlia, Kyron, Jaxon, and Slade) of Scappoose OR, Jeffery Mark Redwine (Candace, Valerie, and Ethan) of Smyrna TN, and Justin Matthew Redwine (Gabrielle, Jameson) of Kennewick WA, and his sister, Lois Osborn of Concord CA. James is preceded in death by his wife, Bobby Sue Redwine, his daughter, Nancy Lois Redwine of Santa Cruz, and his sister, Janice Redwine, of Ukiah.
To order memorial trees or send flowers to the family in memory of James Kenneth Redwine, please visit our flower store.