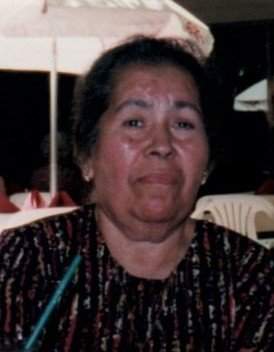 Our mother, Maria Isabel (Chavela) Borceguin Arambula of Moorpark, CA, was welcomed into the kingdom of Heaven on August 1, 2019, after a sudden illness.  She passed peacefully and was surrounded by her children.

She was born on July 2, 1938, in Tepic, Nayarit in Mexico.  She married the love of her life, Miguel, in April 1955.  They migrated to Moorpark in 1963 with three small boys in tow.  Their family was complete after the births of three more children.

Isabel loved being surrounded by her children, grandchildren, extended family and friends.  No child could get away from her without hugs, kisses and tickles.  She enjoyed the hugs and kisses bestowed on her by her children and older grandchildren. Isabel had a great arm and would often times throw her sandal, (also known as a chancla), at her children when they were acting up.  Some would say her chancla could round a corner and hit her intended target.

She also had a green thumb. In her backyard, she had every type of flower imaginable, making her backyard very colorful and serene.  You could take her a dying plant and the next time you visited with her, she’d show the lovely plant she nursed back to health.

Isabel was preceded in death by her husband, Miguel, her mother, Victoria, her father, Pedro, sister, Ignacia, brother, Juan and nephew, Oscar.  Survivors and loved ones include her son, Jose Alfredo, Salvador (Irene), Donato (Becky), Estela Ayala (Victor), Miguel Jr. (aka Pepe) (Christine), and Ruben. She was blessed with 13 grandchildren, 10 great grandchildren and 1 great, great grandchild.

The Rosary will be held on Thursday, August 8 from 5pm to 9pm at the Perez Family Funeral Home located at 1347 Del Norte Road, Camarillo, CA.  The Funeral Mass will be held at 10:00am at Holy Cross Church located at 13955 Peach Hill Road, Moorpark, CA.  Following the mass, will be the burial at Assumption Catholic Cemetery, 1380 Fitzgerald Road, Simi Valley, CA.

Isabel was blessed with the things that were most important to her, a loving family and good friends.  Everyone who knew her experienced her kind and loving nature.  She will be greatly missed but we will always carry her memory in our hearts.

To order memorial trees or send flowers to the family in memory of Maria Isabel Arambula, please visit our flower store.

Rosary will begin at 7pm