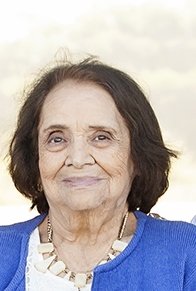 Maria Dolores Diaz (3/12/33- 3/23/19) selfless, devoted wife, mother, grandmother and great grandmother leaves this world and leaves a huge hole in the hearts of those she leaves behind. She was preceded in death by her husband Lorenzo and is survived by her children; Carlos, Dolores, Gabriel, Adrianna , Elizabeth and Roberto; grandchildren Carlos, Illiana, Alex,  Juan, Angie Susie, Giovanna, Andy, Christian, Karen, Veronica, Anabel, Omar Jr, Yessenia, Isabella and great-grandchildren; Christian, Liam and Esteban.

She was a resident of Fillmore and a member of St Francis of Assisi since emigrating from Mexico in 1976.  She was a great admirer of music, classic Mexican cinema and had a tremendous sweet tooth. She spent her entire life putting others before herself and found great satisfaction with the simple things life had to offer.

Services for Dolores Diaz will be held at St. Francis in Fillmore on Tuesday April 2nd at 7:45 pm and a mass will be held in her honor on Wednesday,  April 3rd at 10 am with a reception to follow.

To order memorial trees or send flowers to the family in memory of Maria Dolores Diaz, please visit our flower store.