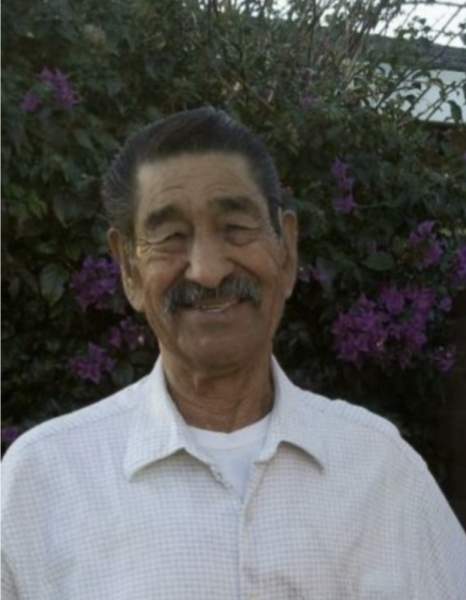 Richard Delgado, beloved husband, father, grandfather, and great-grandfather, brother, uncle, and friend passed away peacefully on November 7, 2020, surrounded by his loving family. Richard was the second child born on November 12, 1935 to Jose and Julia Delgado. He had five brothers and two sisters: Esther, Jess, Joe, Manuel, Ralph, Guvie, and Bobby. He wed the love of his life, Della Romo, on February 17, 1955. They were married 65 years. Together they raised their three children, Lydia, Susie, and Ricky in Moorpark on Magnolia Street till 1968 and pulled stakes and moved to 313 Sarah Avenue, where they gave birth to their fourth child, Ronnie. Richard resided on Sarah Avenue up until his passing. At a very young age, he was taught agricultural work, picking walnuts, prunes, and avocados. He was a hard working man who took very good care of his family. He retired out as a heavy equipment operator after 34 years. He took such pride in operating an excavator. Richard had a great sense of humor, "our #1 handyman” and took great pride in his home. A few of his favorite pastimes were watching cowboy movies, eating chili dogs, and watching Dodger games. Richard was a devoted family man whose greatest joy was spending time with Della, and their children, grandchildren, and great-grandchildren, all whom he loved unconditionally. He was preceded in death by his parents, Jose and Julia Delgado, brothers, Jess, Manuel, and sister, Esther Dominguez. His memory lives on in the hearts of his loving wife Della Delgado, children, Lydia Delgado (Renee), Susie Cuevas (Danny), Ricky Delgado, and Ronnie Delgado (Sara). He was the very proud grandfather of eight, Diana, Vanessa, Crystal, Nicole, Danielle, Monique, Valerie, and Anthony. Also, his eight great-grandchildren, Julianna, Gabriele, Mariah, Maya, Fiona, Lenny, Penelope, and Caden brought him tremendous joy. He also leaves his dear brothers, Joe, Ralph, and Bobby, and wonderful sister, Guvie. He was dearly loved and will be greatly missed. The Delgado family wishes to extend their sincere gratitude to City of Hope, Serene Hospice, and Two Girls Home Care of Simi Valley, and Perez Family Funeral Home for the comfort and support they provided to Richard and his family. Thank you to our extended family, friends, and neighbors for your concern, kind words, and faithful prayers during this difficult time. Due to the current COVID-19 pandemic and restrictions, the funeral service for Richard Delgado is private and immediate family only. Thank you for your kind understanding.
To order memorial trees or send flowers to the family in memory of Richard Delgado, please visit our flower store.